The Plan to go to Mexico

The Decision to Go

Stanley Lewis:
The beauty of it was that as World Cup holders, we didn’t have to qualify. We knew we was going. There was no “Are we going to go, or ain’t we.”

Peter Logan:
My Millwall mate, Frank Nottage, came from Chigwell in Essex. He was one of the ‘crew’ so-to-speak. Some games I’d take the car and he’d come with us. Anyway, on one of the trips the subject of going to Mexico just came up. This was probably a couple of years before. Frank wasn’t a drinker but he wasn’t ever really in the best of health – overweight and that. I’d imagine he’s long gone now…

Jasper Cook:
Together with two friends, John and Pat, we started saving for 1970 on a weekly basis soon after the ’66 final. One was a friend from my local football club and the other was a friend I’d made through cricket. He was a Cheltenham Town supporter. Neither of them went to the ’66 final but I was probably the instigator in getting them to go to Mexico. It didn’t take too much persuasion though!

Patrick Burke:
In 1968 – along with my friend Roy Nightingale – I went to the European Nations Cup Finals in Italy. I’d first met Roy at evening classes in 1967 when I was studying economics, and found out he was a Millwall supporter. So that was that! The trip (to Italy) was organised by the England Football Supporters Club. It was the cheapest way of doing it. I remember it was quite a short tournament. I think there might have been just four teams in it with the two semi-finals, a final, and a third-place play-off. Anyway, we lost to Yugoslavia in Florence and then beat Russia for third place. We got a train down to Rome for that one. And they played the play-off and the Final one after another – on the same day! I think that’s how they did it. As I remember it, the final had to be replayed. But I really got the bug for travelling to football after that. It was then that Roy and me decided we’d definitely go to Mexico.

Another mate – Georgie Edwards – he bailed-out. So then another mate of mine was Alan Jones. He’d never been to a football match in his life! So Alan – we used to call him ‘Cobby’ – he says, “Can I come?” And we say, “You? What d’you want to go for? You don’t even like football!” And he says, “I want to get ‘Mexico’ stamped in me passport!” That’s all he wanted! Cobby looked like Frank Ifield. Don’t suppose they’d ever seen blonde people out in Mexico. Unbelievable he was. Colin & Alan were both dockers. We’d known each other pretty well all our lives. Since schooldays.

Peter Logan:
It was just a question of saving up the money. I had a national savings account or whatever it was and just put a little bit away there. But regularly.

Jasper Cook:
I can’t remember how much a week it was… But we saved up religiously. We put the money in a post office savings account. If we hadn’t we certainly couldn’t have afforded the trip.

Stanley Lewis:
I was saving money from work – but then you’d go on the booze, you know… I wasn’t too good at saving!

Patrick Burke:
I had a desire to travel and I had travelled before. I went to the USA in 1967 – travelling around on Greyhound buses. To do it I had sent some money ahead to America – a relative there – and they put it into an account and I drew on that when I got there. I could only actually take £50 out of the country. Even then, it wasn’t a lot. Before that I’d also been to Belgium. Even going to Bruges was a big adventure then!

Stanley Lewis:
Before that I’d only really been on holiday to Spain a couple of times, but no more than that. Nothing for football before this. We saw it as both a holiday and an adventure really. You didn’t really know what you were going to go into.

Jasper Cook:
I had never travelled outside Europe at that time. In fact none of us had travelled abroad to watch England before. It was a big experience for us – travelling that far. It was going to be a holiday and an adventure 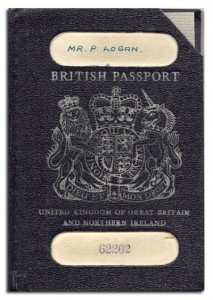 Peter Logan:
I’d travelled a bit I suppose. I was in Germany during my national service and I’d seen football quite a lot in Europe. But this – Mexico – this was a big adventure… Quite a thing.

Jasper Cook:
We were members of the E.F.S.A. (England Football Supporters Association). But it was quite a small set-up then – compared to today anyway. There was a fellow called Richard Coates who was the secretary. He was a chartered accountant by trade and ran the Association on expenses only, as I recall. We booked the whole thing through them. It was all-inclusive with accommodation, match tickets and transport.

Patrick Burke:
We went with the England Football Supporters Association. I have an idea the agent was Pitt and Scott. I wasn’t aware that any tour packages were available, other than for the full tournament period. Nowadays you can go on one-match or maybe three match packages etc… Possibly distance ruled those kind of deals out in 1970.

Peter Logan:
I saw an ad from this travel company and we just took it from there. Frank (Nottage) and me originally booked with a travel firm in Regent Street in London. I was working up at Mayfair Exchange for BT (Post Office Telecommunications as it was then) at the time and worked round there quite a lot. But we cancelled it because of an article in The News of the World newspaper. I think Ron Mount was the reporter. He painted a picture of a dodgy firm. You know, you’d book something and there’d be nothing at the other end. Anyway, we got our deposit back from them and we decided to go with the England Football Supporters Association on their organised trip. They were very well organised.

Stanley Lewis:
You’d read in the paper that there were offers springing-up and saying, ‘send us your money and we’ll get you tickets and hotels.’ People were getting ripped-off. And then my brother said to me, “Don’t do that. Get on the England Supporters Club.” I went, “Have they got one?” Anyway – we found it, wrote off, and they sent us back a form, and now we belonged to the England Supporters Club. And that’s how we went.

…And Paying For it…

Patrick Burke:
I think the cost of the package – flight plus accommodation – was £250. That’s probably increased at least by a factor of ten since then. So I suppose in modern day terms, the cost was £2500. Quite a lot of money but it was a good deal as I am pretty sure the return fare to Mexico charged by the British Overseas Airways Corporation (now BA) was £250.

Stanley Lewis:
We got all our match tickets, hotels and flights. We was going out there for three weeks, seeing four games in Guadulajara then the knock-outs, quarters, semis and final at the Aztec. It was a package for the whole Chabang. The three weeks out there – all in? To my recollection, the trip cost approximately £500.

Jasper Cook:
I can’t remember the details of what we paid, or how we paid for it. But I would hazard a guess at it costing £250-300. We were there for 3 ½ weeks – the full tournament.

Peter Logan:
The trip cost £249 I seem to remember. Doesn’t seem a lot now but it was in them days.

Stanley Lewis:
In the end I couldn’t make the money. I didn’t have enough. So, I went to my old mum and said I wouldn’t be able to go. But she says, “Yes you will!” She had an (insurance) endowment and got £200 out for me. Thank goodness for my mum!

Resistance On The Home & Work Front?

Jasper Cook:
There were no problems with me going to Mexico. I was 36 years old, still working for an estate agent, single, and Secretary of a local amateur football side. I didn’t have a family to worry about

Stanley Lewis:
It was no big deal really. I was single at the time.

Peter Logan:
At the time I was still living at home. I didn’t get married until later and I suppose I could really do as I pleased. I had no one to worry about. No family problems at all. I wasn’t one for drinking and that. I did have a car but it was much cheaper to run one then. It was just for the weekend really. To get to work I’d get a train. Also, I had a secure job. It never got in the way of football.

Patrick Burke:
I was 28 years old and living at home in Brockley, South East London. I was working for HM Custom and Excise, which was a pretty secure job – I knew I had money coming in, but I still did all the overtime going. I didn’t have to make any real sacrifices. My lifestyle was fairly modest shall we say. I didn’t run a car or anything. Football and the gym etcetera were my life. I had no emotional ties. I was not one for chasing the girls. Girls were trouble, unlike your football mates. In fact there was a chap I worked with – a Celtic supporter – and on his desk he had a motto ‘If she said it’s either Celtic or me, would you miss her?’

Stanley Lewis:
I was a painter & decorator at the time. Working on the council [Bermondsey]. I had some annual leave and took another week I think.

Patrick Burke:
We were going to be away for about a month and my memory is that I used up all my annual leave in one go. I think there was more public holidays then though – Queens birthday, and things like that. I suppose I was lucky to be able to do that. We had a big open-plan office and if there were – say – a dozen of you, if you were missing somebody would cover for you. We were all doing the same jobs. I don’t suppose all supporters found it easy to get a month off work. As a civil servant I was entitled to 4 weeks so I used up all my leave in one go. I had to ask permission though.

Jasper Cook:
Fortunately my boss was another football fanatic who had been, for a short time, secretary of Cheltenham Town. I had no problem getting the time off work. My travelling companions, John and Pat, didn’t have any resistance either.

Peter Logan:
I just saved up my annual-leave. I might even I might have taken a week unpaid leave – so that I didn’t use up all my holiday entitlement.

Patrick Burke:
People were jealous. People at work said about how lucky I was going to Mexico. Remember, even going to America in those days was something of a novelty.

Jasper Cook:
Some people were bloody jealous! There were a few who wished they’d planned like we did and jumped on-board. Yes, we left a band of jealous friends behind us.

Peter Logan:
Some of them thought ‘blimey!’ it’s a long way to go because people really didn’t go on long holidays in them days. Now people go to America just like it’s going to Southend, you know. It was something different.